Using the telepathic abilities he’s been hiding all his life, Todd forces the worst of the worst to rob banks…

Fifteen-year-old Patrick Todd lives on the run, hiding out in seedy motels, living out of his backpack and making sure that his mom – recently struck down by a mysterious illness of the mind – is well cared for. But doctors cost money. A lot of money. And, so, Patrick turns to a life of crime. Using the telepathic abilities he’s been hiding all his life, he forces the worst of the worst to rob banks, taking the money before making them turn themselves in to the police.

But someone has taken notice of Patrick’s schemes. A reckoning is coming. Will the police find Patrick in time to save him, or will he become yet another victim of the killer called Zeus?

Written by Ed Brisson (BEYOND THE BREACH, Uncanny X-Men, Old Man Logan) and illustrated by Gavin Guidry (Captain America: The Ghost Army, Going to The Chapel), THERE’S SOMETHING WRONG WITH PATRICK TODD weaves a web of intrigue, deceit and hot pursuit as danger closes in from all directions.

THERE’S SOMETHING WRONG WITH PATRICK TODD #1 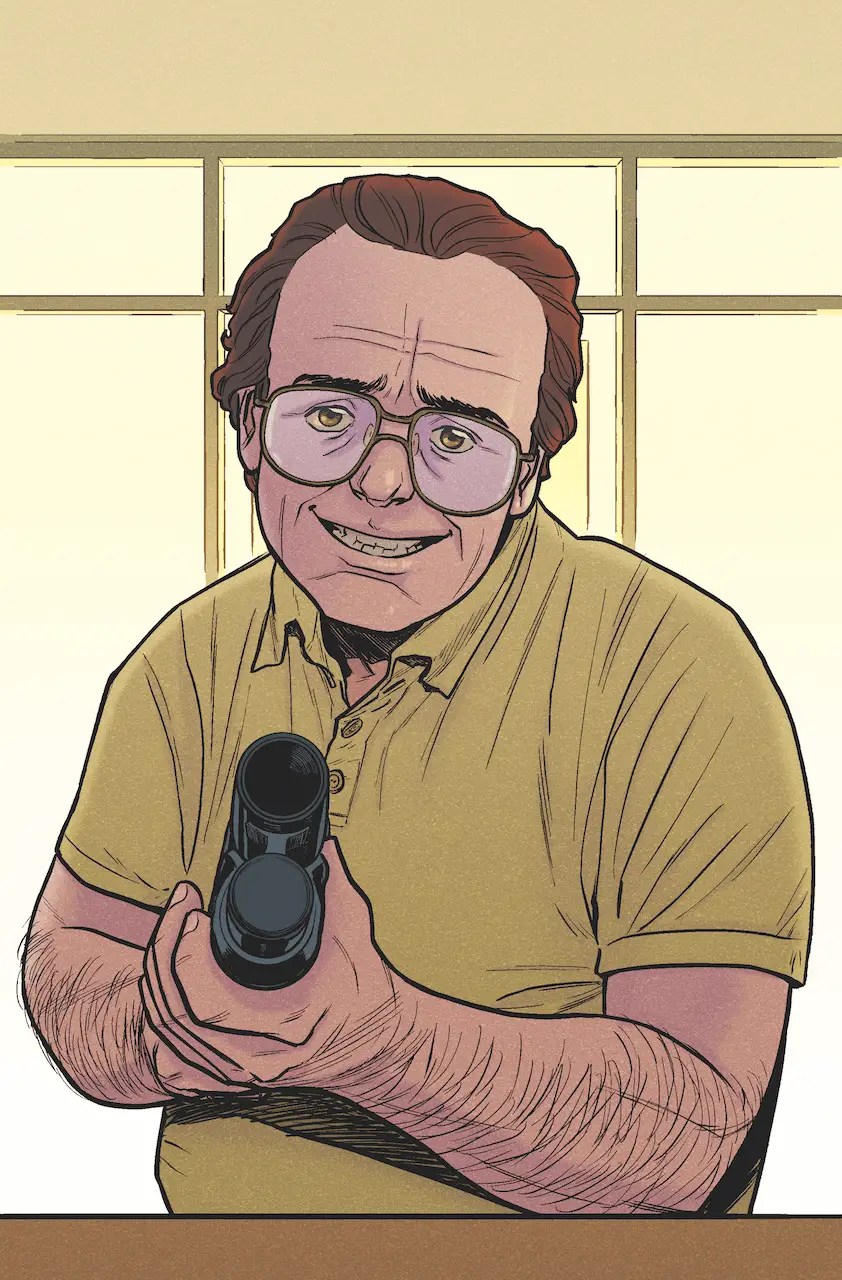 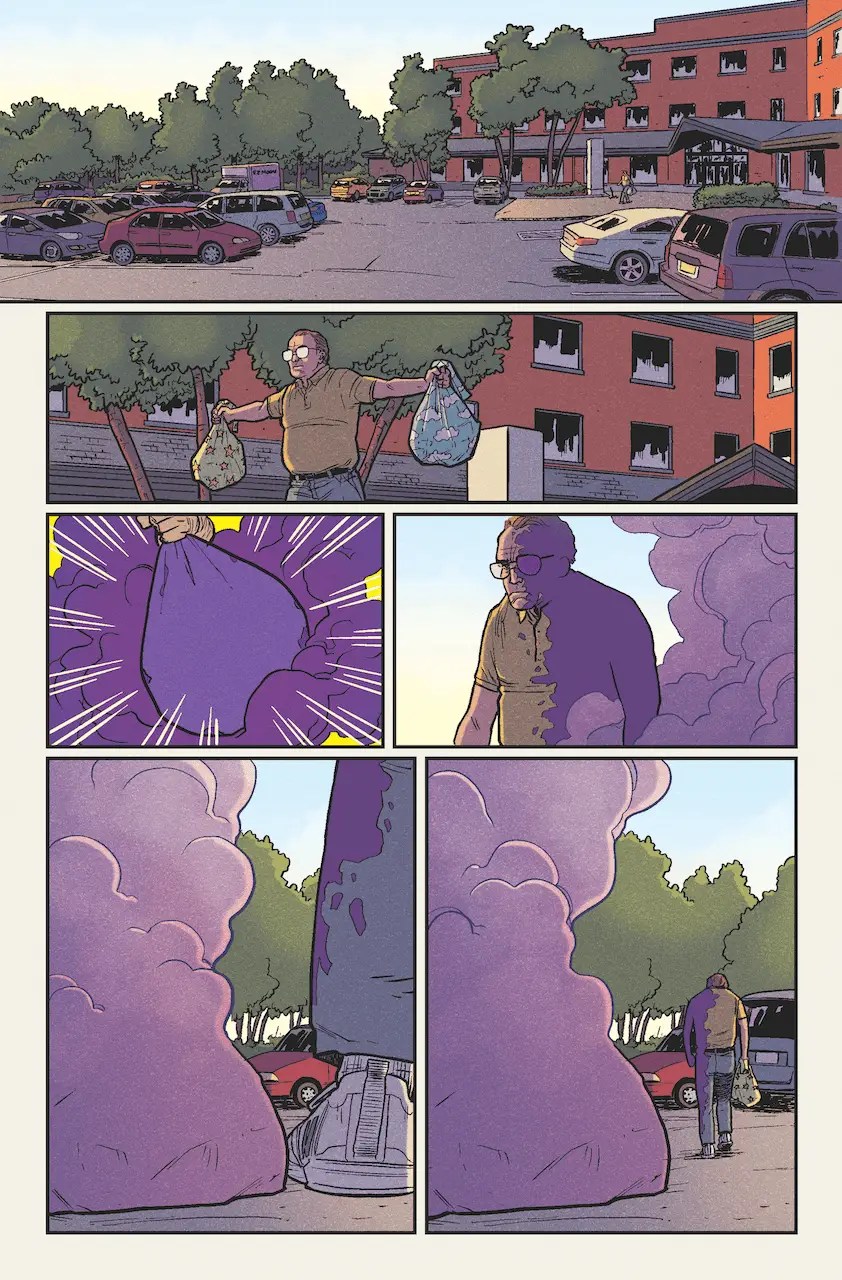 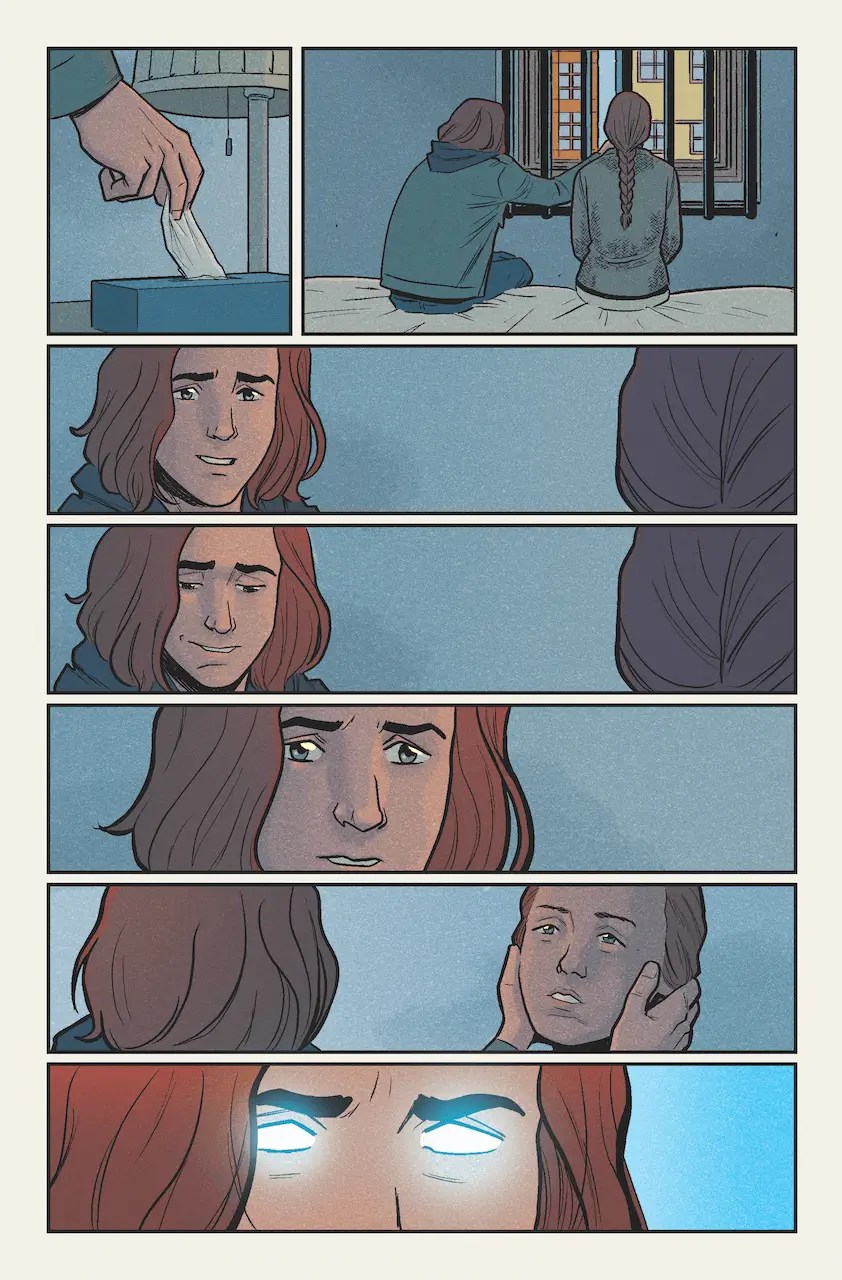 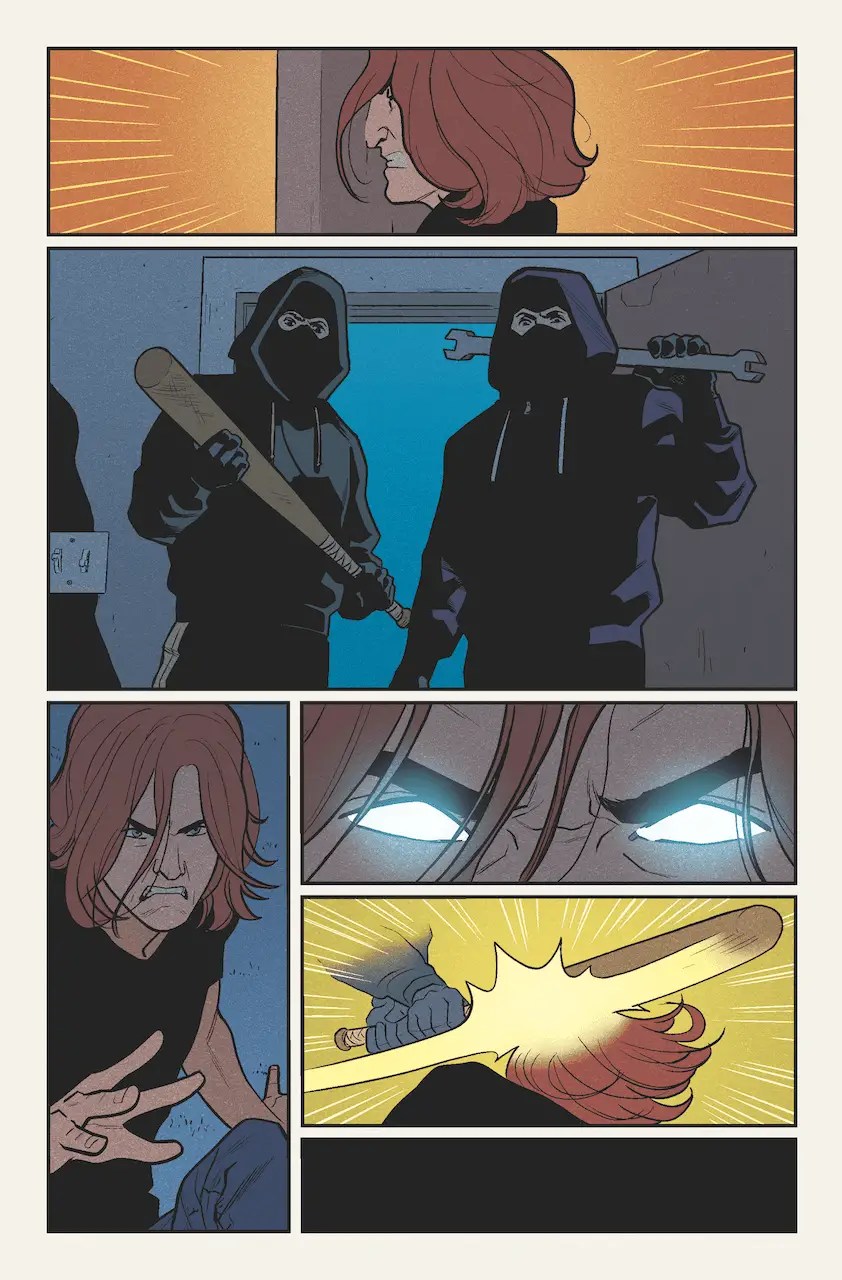 For more on the series, get a word from Ed Brisson below.

ED BRISSON ON WHAT THE BOOK IS ABOUT AND WHY HE IS EXCITED FOR IT TO COME OUT:

“The book follows the life of Patrick Todd, a teenager with a special talent for making people do what he wants. Patrick lives on the run, living in rundown motels, moving whenever he begins to feel that people are paying too much attention. Patrick’s mother, his only family, lives in a care facility, suffering from an undiagnosed sickness that’s left her in a catatonic state, and so it falls on Patrick to pay her bills, ensure she’s cared for and, hopefully, one day cured.

In order to pay for his mother’s medical bills, Patrick has turned to crime, using the telepathic abilities he’d been hiding all his life. His quick pay scheme is to lure out…bad people – people who’d bring harm to others, those who, to his mind, deserve punishment – and telepathically force them to rob banks, handing him the money before turning themselves over to the police. He’s using terrible people to do some good and so feels no guilt nor remorse.

Of course, this isn’t a sustainable plan and things begin to come apart for Patrick when the police start to notice the connection between the rash of bank robberies that seems to be leaving perpetrators confused and suffering.

The police end up being the least of Patrick’s worries when another player comes onto the scene. Someone who’s laser-focused on stopping Patrick. Someone who knows more about Patrick than Patrick seems to know about himself.

This book is one that’s been bouncing around in my head for the last couple of years, one that I’d pull out and work on from time to time, just letting grow this idea of a kid who can force anyone to do what he wants to.

At fifteen, Patrick would be at an age where he’s developing his sense of affective empathy, his ability to really consider the effect of his actions on others. Having the ability to make others do what you want is going to impact those feelings of empathy and I think that there’s a lot there that can be really interesting to examine in the story. A lot of the decisions he makes now will have an indelible impact on the person he becomes later in life. His wants, in this story arc, are pure. He wants to help his mom. We can all empathize with that. However, his methods are somewhat cruel. Sure, he believes that those he manipulates deserve it (and many of them do), but appointing yourself sole arbitrator of who does and doesn’t deserve to be punished is an incredibly slippery slope.  At every point, with every decision, Patrick is at a crossroads. Does he become a hero? Or does he become a villain?

Story aside, I’m excited to be working with the whole creative team here. I’d met Gavin Guidry at HeroesCon back in 2017. We were seated in the same section and would chat it up a bit during the show. I really love his artwork and had always wanted to approach him about working on something together, but things were pretty crazy for me in terms of schedule right up until the pandemic hit. Once I had a few moments of free time, I started developing this project with him in mind and, thankfully, he was on board for it. I think a lot of people are going to be floored by the work he’s been doing on this book; he’s absolutely been knocking every issue out of the park.

Additionally, I’m happy to be working with Chris O’Halloran again. Our first time working together was actually while putting this pitch together, but since we started on this, we worked on a one-shot over at Marvel that he absolutely killed on.

And, of course, my favorite letterer and yours, Hassan Otsmane-Elhaou is back and doing just stellar work on this.”

ED BRISSON ON WHAT SOME OF HIS INSPIRATIONS WERE BEHIND CREATING THE BOOK:

“You know, I honestly can’t remember? I know part of it came from me reading about teenage psychology and the idea of teenage boys having to redevelop this sense of empathy in their teens. It got me thinking of what life would be like if someone believed that there were no repercussions for their actions because they could control every, situation they found themselves in. From there, ideas…just scenes and bits here and there, started to come together. Not only for Patrick but for those whose lives he touched.

I know that there have been stories about telepaths in the past, but I think one of the things that is interesting about this is that we’re really getting into the consequences of Patrick’s decisions here. It’s not necessarily about the big, city levelling battles here, but more about the personal stakes in his life and the lives of his victims. There’s a lot of murky grey in this book, there isn’t a clear line between right and wrong.”

ED BRISSON ON (3) REASONS WHY COMIC READERS SHOULD PICKUP THIS TITLE:

GAVIN GUIDRY ON HIS APPROACH TO THE ARTWORK:

“I wanted the characters to feel unique and sort of lived in, from a design perspective, and I also wanted to approach things a little more texturally than I have in the past. There’s always a bit of a balance, for me, between “illustrating” and “cartooning” that I try to strike, and I think I found a nice, sweet spot here. Having characters feel believable and real, to an extent, while also being able to push things a little further when the proverbial wheels come off of the proverbial cart.”

GAVIN GUIDRY ON SOME OF THE BIGGEST CHALLENGES (AND REWARDS) OF CREATING ARTWORK FOR COMICS:

“Creating and maintaining a singular world and aesthetic, I think, is probably the hardest part. With Patrick Todd, we’re in a slightly heightened but still quite grounded world set in 2010. Trying to keep things aligned with that particular moment in style and technology, while also filling the world with believable cast and background people, basically whole-cloth, is pretty tough, but seeing the finished product still makes things feel a little bit like a magic trick.”

GAVIN GUIDRY ON HOW HIS EXPERIENCE HAS BEEN SO FAR WORKING WITH THE CREATIVE TEAM AND AFTERSHOCK:

“It’s been great. Everyone’s been fantastic to work with. Very insightful and encouraging. I’ve been wanting to work with Ed for years, and Chris is one of my favorite colorists, and does the exact sort of things I was hoping to have for this book. I think Hass is the secret weapon of the group. It’s always cool to see your artwork come back colored, but there’s something about it coming back with full letters, too, that just makes it feel real. I couldn’t ask for a better situation to be in, and I can’t wait to see what people in the outside world think of our work.”