AfterShock Comics has announced Almost American, a new spy comic created by Janosh “Jan” Neumann. The comic is based on the true story of Neumann and his wife, Victorya, two former Russian spies who defected to the United States in 2008 and provided a significant amount of information to the FBI and CIA, only to be kicked off government payroll and left broke and jobless in Oregon.

Set to launch in September, Almost American is written by Ron Marz (Green Lantern, Silver Surfer) and illustrated by Marco Castiello (Giant-Man, Doom 2099), who are joined on the title by colorist Flavio Dispenza and letterer Rus Wooton. Almost American #1 features a main cover by Wooton, as well as an incentive variant cover by Juan Doe.

“Almost American is the real-life story of husband and wife Jan and Victorya Neumann, Russian intelligence operatives who had to flee Russia for their lives, and wound up in America, caught up in the bureaucracy and red tape of the U.S. government,” said Marz. “The story is that much more fascinating because it’s all true. These are real events that happened to real people, and it gives some pretty fascinating insight into the intelligence world works… and doesn’t work. My first professional writing work was as a journalist at a daily newspaper, so in some ways this project was a combination of what I learned as a journalist and what I’ve learned writing comics. It’s filled with details and stories I learned from talking to Jan extensively, the kind of stuff you almost literally could not make up.”

When asked to give three reasons as to why readers should pick up Almost American, Marz stated, “First, it’s a compelling true story. You can tell any kind of story in comics, but we generally tell a lot more fictional stories than true stories. There’s more reportage here than in anything I’ve written. Second, the art by Marco Castiello is fabulous. This is not an easy assignment, drawing real people, real events and real locations, but he’s doing a wonderful job. And third, this is the beginning of… well, a beautiful friendship! You don’t expect to have a Russian former intelligence operative as a friend, but life is strange. We’ve started work on a few other projects together, so I think you’ll be hearing a lot more from us as a team.”

Neumann himself discussed the comic as well, including what inspired him to tell this story. “It’s hard to call it inspiration, I guess it was more of just a desire to share our personal experiences,” he explained. “And to remind readers that there is always hope even if you end up in some really terrible, complicated situations. All you can do is never give up and keep pushing forward.”

Neumann also explained how Almost American plays into today’s political climate. “It’s sad, but we’re heading full throttle to The Cold War 2.0,” he said. “I don’t see anything that can stop this clash between East and West. And that clash is playing out in the shadows, spy vs. spy. Almost American is about those shadow wars and how this game shows no mercy for its players. Once you started to play this game, you can’t quit, and it’s only matter of time before you become yet another casualty.”

Speaking on his time as a Russian spy, Neumann said, “It’s hard to evaluate moments by how scary they were. But the major turning point moment for us occurred when we made the decision to go to the U.S. Embassy in the Dominican Republic. This moment split our life into two parts: before and after. It was the most psychologically and emotionally complicated, complex, and stressful day we’ve ever experienced. It’s impossible to describe how we felt, and we’ll be reckoning with our decision for the rest of our lives.” 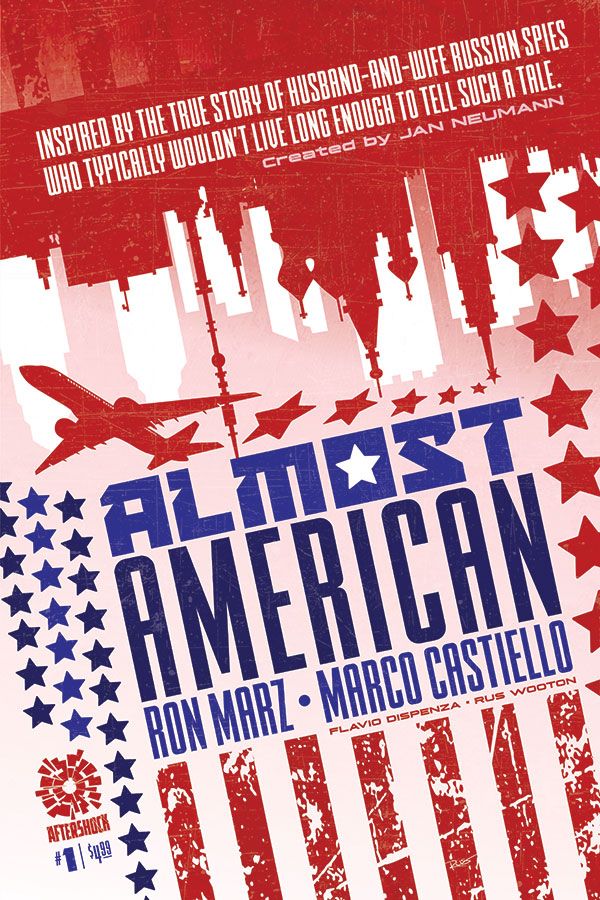 Spies…like us? In 2008, husband-and-wife Russian intelligence operatives walked into the U.S. Embassy in the Dominican Republic in order to defect, making a deal to trade secrets for new lives. But instead of the American Dream, Janosh and Victorya Neumann found themselves caught up in red tape, bureaucracy and turf wars between the FBI and CIA — all while their past tries to kill them.

Based on the real-life story of real-life spies, ALMOST AMERICAN is written by comics master Ron Marz in close consultation with the Neumanns, with art by rising star Marco Castiello. Written by Ron Marz and illustrated by Marco Castiello from a story by Jan Neumann, with colors by Flavio Dispenza and letters by Rus Wooton, Almost American #1 goes on sale Sept. 1 from AfterShock Comics.